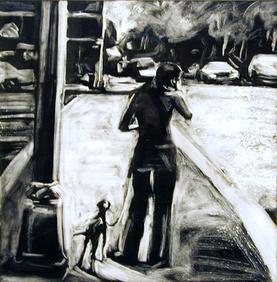 From The Art Gallery at Kingsborough Community College:

Lisbeth Firmin enthusiastically seeks the fertile, messy ground of the monoprint precisely because it declares itself outside neat categories.

For her, the technique’s flexibility serves not only as as a procedural step in her effort to achieve a graphic approximation of reality, but in a broader sense as a way to, as she puts it, “…ride the edge between abstraction and realism”. Apparently her discomfort with definition runs deep. Like the work of John Sloan and Edward Hopper, artists with whom she feels a strong affinity, Lisbeth Firmin’s work pursues no categorical firmness but instead seeks a deft balance between the subject and the pictorial structure that holds it together.