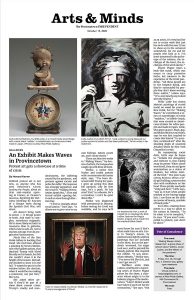 Lady Justice, by Lisbeth Firmin. “Lady Justice is crying because our justice system is broken and has been politicized,” Firmin writes in her statement.

An Exhibit Makes Waves in Provincetown 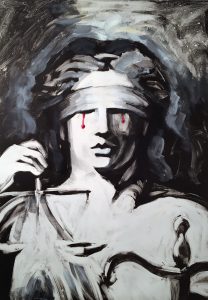 “Lady Justice” is artist Lisbeth Firmin’s comment on the state of our democracy and is included as part of a “Making Waves: Artists Speak Out” pre-election virtual exhibit by the Rice Polak Gallery in Provincetown.

Lisbeth Firmin continues the tradition of the “San Francisco School” important in the 1940’s and the 1950’s, in opposition to the “Abstract Expressionist” movement of New York. This group led by Diebenkorn was a continuation of the “School of Paris” (Picasso, Matisse, and Braque.) Ms. Firmin is unique in this age of the rehashing of surrealism in holding tight to the figurative. Her low-keyed choice of palette creates a modest visual use of the figure in normal surroundings.

Lisbeth Firmin’s paintings show a humane generosity. Much like Hopper, her figurative work displays profound insight into the human psyche.

I have a great taste for all that is chiaroscuro, think Caravaggio, and I find Firmin’s paintings exceptionally compelling due to her unique use of light and shadow.

The excitement created from seeing Firmin’s ordinary(not) urban scenes of people walking down streets or standing on bus and train station platforms is arresting, in quite the same manner when looking at a John Sloan painting. She sees the moment which would appear on first glance to be rather innocuous, but stops it, and us, in time to see what she sees, and we can’t help but to say, “Man, there’s something good happening there.

Review, “Lisbeth Firmin Reaffirms the Solitude of the Urban Scene”, That’s Inked Up

“Like the work of John Sloan and Edward Hopper, artists with whom she feels a strong affinity, Lisbeth Firmin’s work seeks a hefty balance between the subject and the pictorial structure that holds it together.”

“Lisbeth Firmin combines discipline and freedom in this group of new monoprints: a finely tuned formal sense combined with such sureness of mark that each gesture seems inevitable. She is able to capture the fleeting moment and a specific transient light: all seems changeable and mutable except for the massive and solid New York architecture.”

“Lisbeth Firmin’s art combines traditional landscape painting with expressive modern imagery. Her urban landscapes are inspired by the energy of the modern city and the sometimes alienated places that people occupy in it.”

“To capture light – Firmin’s foremost concern – lush vertical strokes are combined with vigorous horizontal sweeps of muted color. Her depictions are not merely a reaction, like an emotional response to a stimulus, but more precisely a calibrated representation of her experience and the forces, either atmospheric or intuitive, that harness it”

“In Lisbeth Firmin’s paintings of the city, human figures are suspended in time. The perspective is never straightforward but always leans toward the unusual”

Review, “Frozen in the Amber of the City”, New York Times

Artist LIsbeth Firmin knows the city. In her streets…you feel the romance, even when they’re empty. That’s because she blurs the edges…which leaves you telling yourself stories: Not of what you see, but what you can’t see.”

“The monoprints that you submitted to the 46th Chautauqua National Exhibition, 2003, were absolutely stunning and well deserved the CCVA Award I selected. I noticed that they garnered a huge amount of attention from people at the exhibition.”